As we slowly emerge from lock down, some restrictions are eased I managed to get a wee wander around the city. Still very quiet, very eerie, it seems somewhat Post-apocalyptic, yes one should stop being so melodramatic.

Most of the photos were taken on a Sunday afternoon, this would never be possible in normal circumstances. 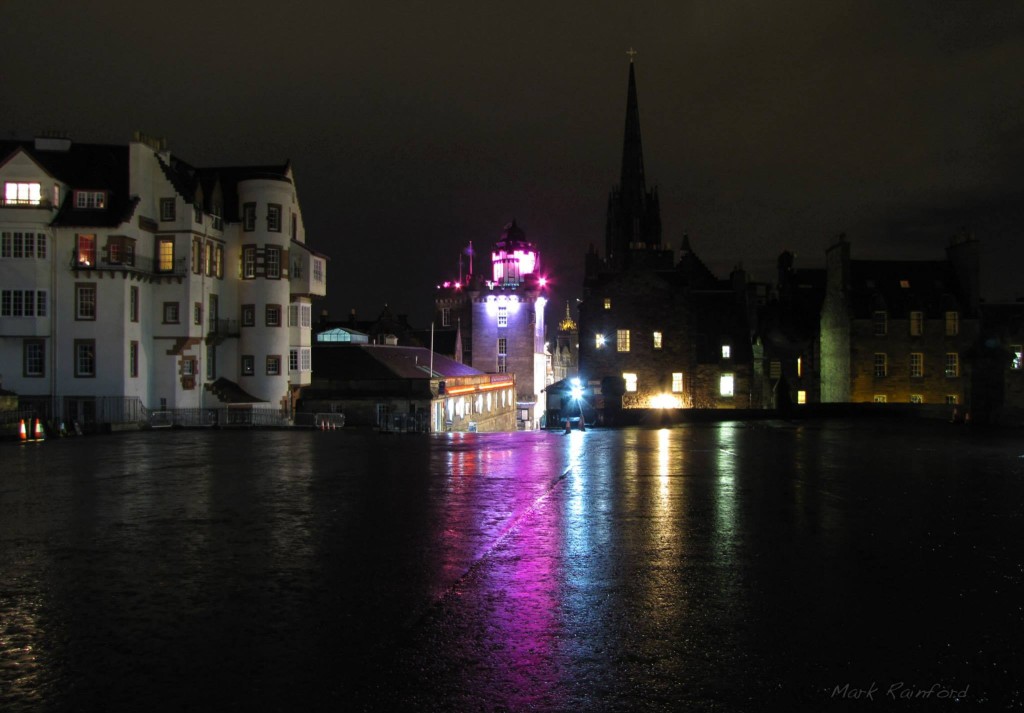 Taken from the Castle Esplanade, looking down Castlehill & The Royal Mile we can see – Ramsay Garden (Nice apartments if you can afford it), – Camera Obscura formally Outlook Tower (small Observatory dating from 1850), The Crown Of St. Giles Cathedral and the Hub (an old Church now home of the International Festival)

Tourist Attractions on the Royal Mile Edinburgh, this mile long street has numerous attractions, not just for tourists.   Starting on Castlehill (West End)  I will go down the Royal Mile (High Street) through the lawn market ending up on the on the other end at the Cannongae (East End) pointing out what I think may or may not be worth a visit.  I do realize that this has been done many times, but here is my take…  Not included pricing, that changes all to often, but web links are there.

The Castle, built atop of a volcanic rock this dominates the Edinburgh skyline and probably the first place to visit for many tourists.  A wee bit pricy around £16 for an adult, but certainly worth a visit.  It’s Home to Edinburgh’s oldest building ‘St Margaret’s Chapel’ this was built in the 12th century, Mons Meg a huge 17th Century siege cannon, the National war museum.

This is a brilliant quirky thing to see, about 150 years old, inside the Victorian rooftop you get to see moving images of around the city through a periscope, even flip and move people around.  on your way up you will see many things that will play with your mind.  Oh its also worth mentioning that this is that they claim to be Edinburgh’s oldest attraction

You can’t come to Scotland without trying some of our fine Whisky’s, learn how its made, participate in some tasting and smell the aromas.  Remember though in Scotland its Whisky not Whisky

The Hub is a central source of information on all the Edinburgh Festivals. Its Gothic spire one of the highest point in central Edinburgh

Easy to miss, this is a building with historic significance a 17th century high-tenement house.   Edinburgh used to be so crammed together in the old town with this style of building.

This heart-shaped mosaic, formed in coloured granite setts is built into the pavement just outside St Giles’ Cathedral marks the spot of the 15th-century Old Tolbooth, this was the main municipal building in the city of Edinburgh for more than 400 years.  This Tolbooth was also the Edinburgh’s main gaol where public execution and torture were conducted.

St Giles’ Cathedral is the historic City Church of Edinburgh. With its famed crown spire it stands on the Royal Mile between Edinburgh Castle and the Palace of Holyroodhouse. Also known as the High Kirk of Edinburgh.

Not the original location of the Mercat cross, original a little further down, demolished 1756, rebuilt in this location around 1880.  The Mercat cross was a place for important civic announcements, punishment and sometimes executions.

The Tron Kirk is a former parish church, It is a well-known landmark on the Royal Mile. It was built in the 17th.

This is a nice place, take some time and look around some old children’s toys, perhaps experience some nostalgia.  Surprising quite a lot to look at spanning several floors

This is an historic house reputed to have been owned, lived in by Protestant reformer John Knox during the 16th century

The Kirk of the Canongate, or Canongate Kirk, serves the Parish of Canongate in Edinburgh’s Old Town,

The Museum of Edinburgh, is a museum housing a collection relating to the town’s origins, history and legends

This is the home of the Scottish Parliament at Holyrood,  Construction of the building commenced in June 1999 formal opening took place on 9 October 2004.  it is open to visitors Monday to Saturday and is free of charge to visit

Holyrood Palace, is the official residence of the British monarch in Scotland.  Disappointingly photographs inside are not permitted